Pyracantha in red, orange or yellow can look quite amazing

Pyracantha in red, orange or yellow can look quite amazing 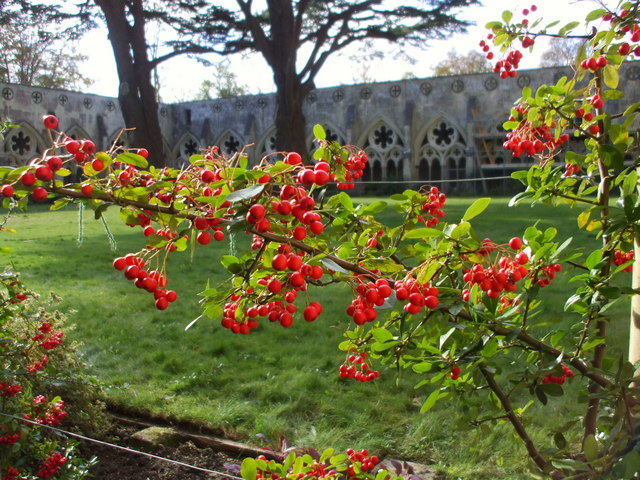 Pyracantha is a shrub which produces bright red, orange or yellow berries in the autumn. It can look quite amazing.

Pyracantha comes from two Greek words: pyr - fire and akanthos – thorn. In English it’s sometimes known as … firethorn. The nasty thorns make it a surefire (!) way of distinguishing it from cotoneaster, a similar berrying shrub.

Fire - one of the four elements

Fire is one of the four elements along with earth, air and water. At a time of thrashing rain and high winds (yes, August but there you are), I’m focusing on keeping warm and dry. And, slightly regretfully, thinking ahead to autumn. No need to get my mind around winter yet.

I’m thinking about two things: getting the chimney swept and pruning the pyracantha.

The excellent attributes of pyracantha

If you’re thinking of giving house room to firethorn, it does have some excellent attributes. It can be grown trained against a wall, as a freestanding shrub or as ground cover. It can grow up to 6m/20ft tall.

Its dense thorny structure and evergreen leaves make it good as a ‘security’ hedge and good for roosting or nesting birds. Its flowers in late spring and early summer are creamy white, providing nectar for bees at a point when there isn’t much around. Its masses of wonderful berries develop from late summer, mature in early autumn, and are loved by birds, especially blackbirds.

Frosted pyracantha near Barton-upon-Humber, North Lincolnshire. The blackbirds have already eaten about half the berries.
© David Wright and licensed for reuse under Creative Commons Attribution-ShareAlike 2.0 Generic Licence.

To keep pyracantha under control and producing good looking flowers and berries, it needs to be pruned. After flowering, in late summer, is the best time for wall-trained shrubs.

With wall-trained pyracantha, the idea is to prune in order to make the berries more visible and to keep the plants in shape. In late summer, shorten all side shoots coming from the main framework branches to just short of the clusters of berries (usually about two to three leaves from the base of the side shoot).

Red and orange pyracantha on a white-painted wall near Stockbridge, Hampshire.
© Jonathan Billinger and licensed for reuse under Creative Commons Attribution-ShareAlike 2.0 Generic Licence.

With pyracantha hedges, trim them twice or three times between spring and the end of summer, retaining as many berries as possible.

Can I grow it and should I grow it?

Pyracantha will grow almost everywhere except in waterlogged conditions. In shady and north-facing places, though,  fewer berries tend to be produced. It does best in full sun and/or against hot walls.

Problems? Helen Yemm has some answers.

Pyracantha is certainly worth considering. For me, the help it gives to wildlife plus the wonderful boost of colour in autumn and winter would probably swing it.