Shrubs have been looking fantastic in my garden this year. When we’re all so busy it’s tempting to give them their heads and let them romp away. Don’t! They really do need to be kept in hand so that they’ll stay looking fabulous into the future.

Red and orange pyracantha on a white-painted wall near Stockbridge, Hampshire.
© Jonathan Billinger and licensed for reuse under Creative Commons Attribution-ShareAlike 2.0 Generic Licence.

Pyracantha has to be pruned to keep it under control and producing good looking flowers and berries. After flowering, in late summer, is the best time.

Here’s an outline of what to do:

Box hedges around lavender beds at Tyntesfield. Thanks to Derek Harper for this image.

If you didn’t harvest lavender for drying in June and your lavender has finished flowering, then it’s time to cut it back.

I’m trying to grow a rosemary hedge by my front gate where there is currently one enormous plant. I’m going to cut this one back by a third and make sure I don’t cut into the woody part. The other rosemary bushes which are in the back garden (all grown from cuttings taken by my mother) are just going to be clipped to look neat and to keep them bushy.

Santolina is also known as cotton lavender but it’s no relation to the lavender we’ve just been talking about. Santolina has mounded aromatic silver-grey foliage and button-like yellow flowers in late summer, and is great as edging. It loves sun-baked places and can grow quickly to 60cm (2ft) high. At this height it can be rather straggly but you can easily keep it in hand by trimming.

If you don’t want the flowers:

If it's become straggly:

These are pleasant jobs for warm weather. Enjoy being out in the fresh air! 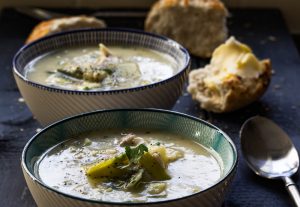 Recipe - chicken, potato and leek soup
Read post
Five things you can do in a day bed!
Read post
Product added successfully to your shopping cart.